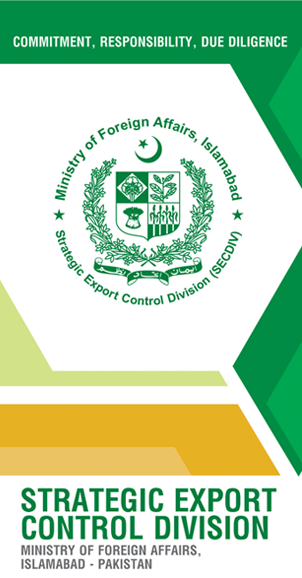 Lists of goods and technologies subject to regulatory controls were published in 2005 (SRO 1078(I)/2005) and subsequently reviewed/revised (SRO 1142(I)/2016). The lists are consistent with the scope of export controls maintained by the Nuclear Suppliers Group, Missile Technology Control Regime and Australia Group. These are periodically reviewed/revised by a standing Joint Working Group.

Pursuant to Export Control Act 2004, the Strategic Export Control Division (SECDIV) was set up in 2007 as part of the Ministry of Foreign Affairs (SRO 499(I)/2009), to administer export controls. SECDIV is the licensing Authority for items mentioned in the Control Lists and those non-listed items which could possibly be used in WMDs or their delivery systems. It also coordinates enforcement of the Act.

An Oversight Board has also been set up (SRO 693(I)/2007) to monitor the implementation of Export Control Act 2004, including the formation and functioning of SECDIV.